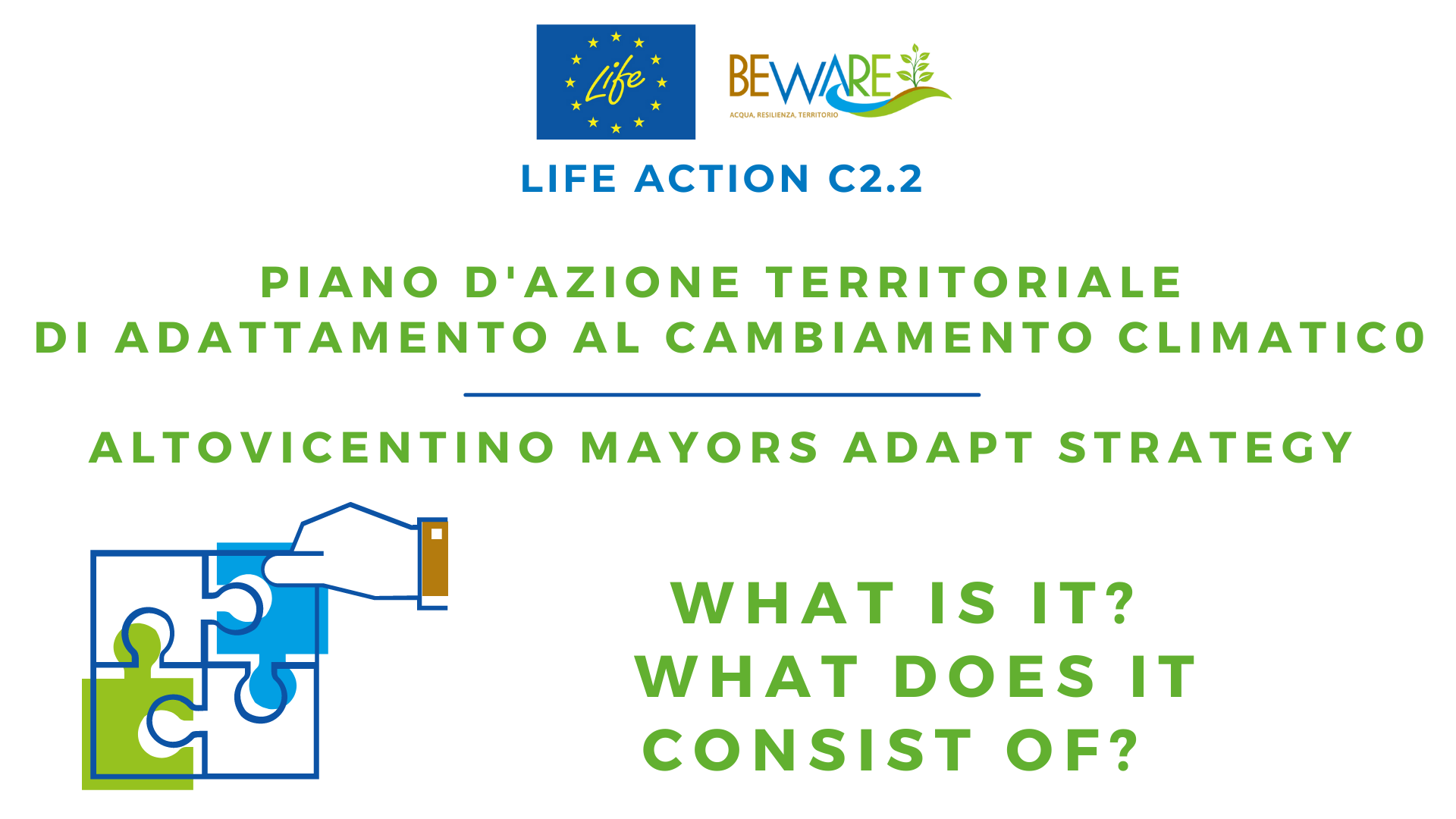 06 Dec 2021 AltoVicentino Mayors Adapt Strategy – What is it? What does it consist of? Let’s talk about it with Giulio Pesenti

Posted at 09:59h in Uncategorized by Life Beware 0 Comments
0 Likes

Giulio Pesenti, facilitator and designer of the LIFE Beware participatory process for Veneto Agricoltura, was contacted within the framework of the LIFE Beware project to give voice to the new Climate Change Adaptation Plan for the Altovicentino area. The drafting of the plan was a unique opportunity to discuss the issue of climate change mitigation and adaptation, which involves all social groups, without exception.

1) How would you explain what a Mayor’s Adapt Strategy consists of? And what does it entail for the municipalities that adhere to it? What are the objectives that LIFE BEWARE wants to achieve through the Plan?

AltoVicentino Mayors Adapt Strategy fits into the context of the Covenant of Mayors, what is it and why is it important for the territory?

As we all know by now, the effects of global warming have already begun to manifest themselves in every corner of the planet and consequently citizens, organizations and governments are taking action by implementing strategies to prevent and mitigate potential damage. The focus is often on what new habits and virtuous behaviors should be adopted by individual citizens, or, on the opposite side, what laws and national and transnational roadmaps would be necessary to achieve certain targets in the next 10, 20 or 50 years. The European Commission, for example, has set a strategic goal of achieving climate neutrality by 2050.

Between these two extremes lies more than 90% of the reality in which we live, made up of infrastructure, territories, energy flows, food, resources and human, public and private organizations. This collective space is where we can intervene concretely and personally to trigger profound changes and systemic innovations, with the aim of making our lives more prosperous and at the same time more resilient, both from a social, economic and environmental point of view.

The BEWARE Action Plan fits in this space. It responds to the needs and problems identified by those who live in a given territory (the AltoVicentino territory in this case) and proposes concrete and effective actions and interventions in view of adaptation to future intense or extreme climatic events (floods, storms, droughts, etc.). The initiatives have been imagined and developed by a diverse group of people – students, professionals, technicians and administrators; through a participatory process that lasted a couple of years. It began with several meetings and workshops on the themes of the project and ended with online group meetings and working tables for the definition of proposals.

This phase of collective co-creation of the plan took place in parallel with the development of another action plan led by many local municipalities, linked to the European initiative of the Covenant of Mayors and known by many with the acronym SECAP, or Sustainable Energy and Climate Action Plan. The SECAP is characterized by a time-frame of 10 years and pushes the signatory municipalities to engage in the implementation of the foreseen actions during this time frame.

For the BEWARE project, the SECAP has become an opportunity to increase the dissemination and adoption of its proposals among the municipalities of the territory with the goal of integrating them into territorial planning from now until 2030.

2) The community of the AltoVicentino territory has been very active throughout the project, what do you think is the key that has generated so much interest and support for Life BEWARE?

Something that I truly appreciated about the involvement process we implemented was the attention and care given to human relationships, both among the team members and with all the people and groups we came into contact with.

These moments of encounter and sharing were essential, especially during this unprecedented historical moment that is characterised by social distancing, the emotional bubbles of social networks, and an increasingly weak ability to connect and trust other people – and institutions.

Climate change can be frightening because of its danger and complexity, but it can also encourage people to commit themselves to give their contribution along with the community. This sense of community has always been very strong throughout the project, even when we had to bring all our conversations and experiences online, due to the sudden pandemic.

Allowing this listening in groups leads to generating trust, and when you have trust then (and only then) can you think about getting a collaboration or reasoning about possible strategies. All this may seem obvious, but unfortunately it is not at all: we often forget that we are dealing with human beings and focus only on technicalities, data and problems to be solved. It takes its time. Sometimes months, sometimes years if the communities are in conflict, but once people get their act together and base their work on solid foundations the chances of getting good results can really increase exponentially.

3) In this participatory process, the Action Plan describes a strategy that includes a journey of head, heart and hands in a process that is not always easy and free of obstacles. If you had to take stock today, do you think that “head” and “heart” have worked in synergy? What are the prospects for the third and final phase, i.e. for concrete actions in the coming months?

The “HEAD – HEART – HANDS” scheme is the most simple and yet effective theoretical model I know for achieving social innovation in any kind of context or human system. To me, it reminds us of the importance to follow these three steps in this precise order in whatever we do, be it an individual choice (like planting a tree) or a collective one (like writing an action plan).

First there is a brainstorming phase, in which all data about a specific situation is collected, making sure they are not ideologised, manipulated or distorted. Keep in mind that misinformation is also rampant in climate activist circles and among those working in the world of sustainability (e.g. if you are trying to reduce CO2 emissions by buying and using more efficient technologies you may have fallen into the trap of jevons paradox). The goal here is not to convince ourselves that we are right, but to have the clearest and most objective view of what is happening.

When it comes to global issues, the information we receive can be particularly depressing. And here we move on to the heart stage, where we have the space to share with other people how we are personally experiencing the situation we are studying, and how we can undertake a path of change. In this phase, new possibilities, ideas and scenarios also begin to emerge.

This leads to the hands-on part, where we look to the future and gather the tools to plan and co-create together. In our case, the result of this process is the final document of the Mayors Adapt Strategy for climate adaptation.

The danger of interrupting the process halfway through and dispersing the network of people that has been created over all this time is real and came up many times during the round table discussions. This is why we have introduced “strategic” actions among the proposals, designed to avoid this problem and to promote a process of constant and long-term collaboration with all the realities of the territory.

We have tried to incorporate all the passion and wisdom of the participants into the plan. This event will also be a chance to thank them, and everyone who has been involved in the project.